My first round of GMO-free, organic home made tortillas were great. Bob’s Red Mill brand of Masa Corn flour worked well… but would soaking my own organic whole corn in lime – (undergoing the process of nixtamalization) produce an even better result?

It was time to find out.

I’ll share the story of how I found a source for a 25 pound bag of dried, whole organic corn in my next post – but until then – here are the first steps in making your own organic Masa Corn Flour: 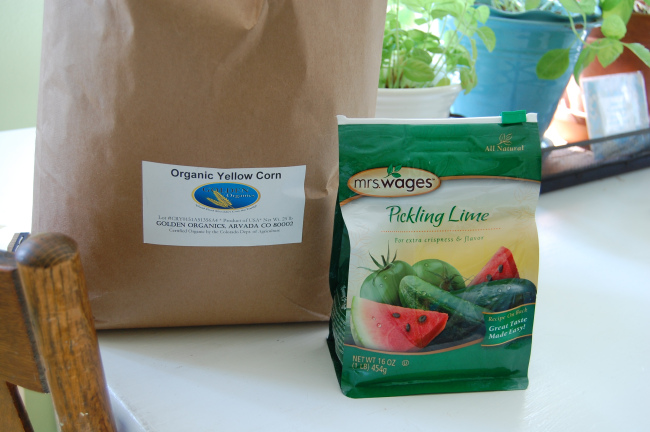 Pickling Lime was easy to find – I purchased mine at a local hardware store. You might even find it in your grocery store with the other canning items.

I found instructions on this blog – (thank you, Cheeseslave!) – she made it look so simple.

I doubled her recipe, since I wanted to experiment, (and I’m Italian… I just can’t help making WAY too much food all of the time). 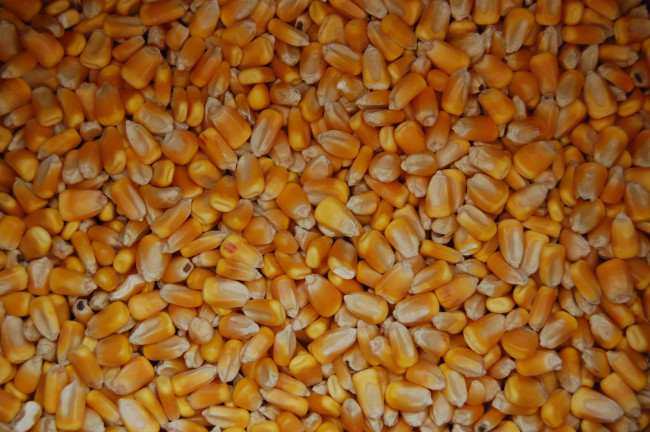 So here’s how it went: 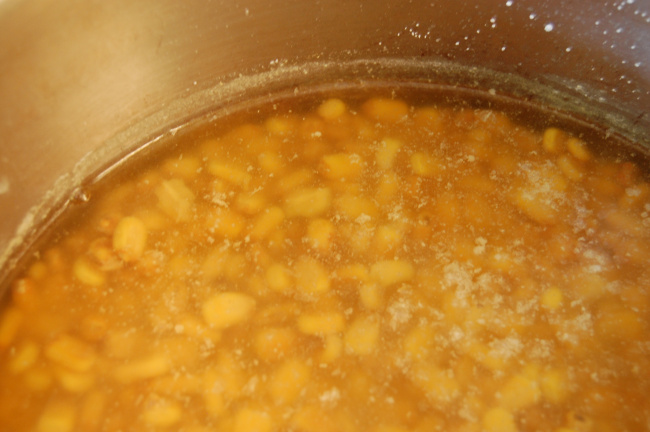 Cover corn mixture with filtered water in a stockpot (make sure it is covered by a few inches, as the corn will expand).  Bring mixture to a boil, then simmer for 10 minutes. Remove from heat and cover. Let soak/ferment in that cooked limewater for at least 24 hours – or up to two weeks. I let mine soak for 3 days.

After the soaking period, it’s time to rinse and get ready to make tortillas! 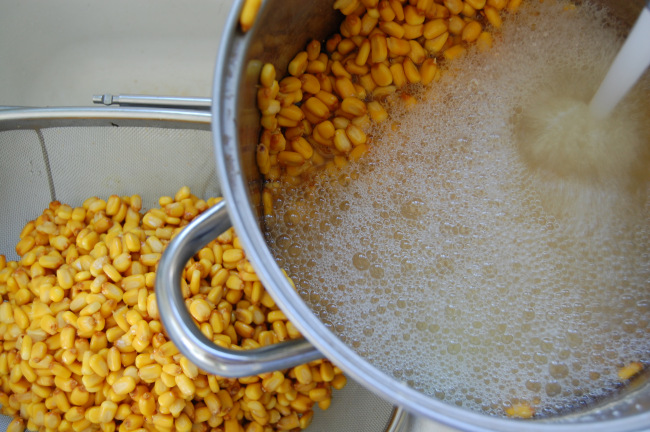 It took a lot of rinsing to get the slimy texture off… I rinsed and rinsed some more. Still a tad slimy, but that’s part of it. 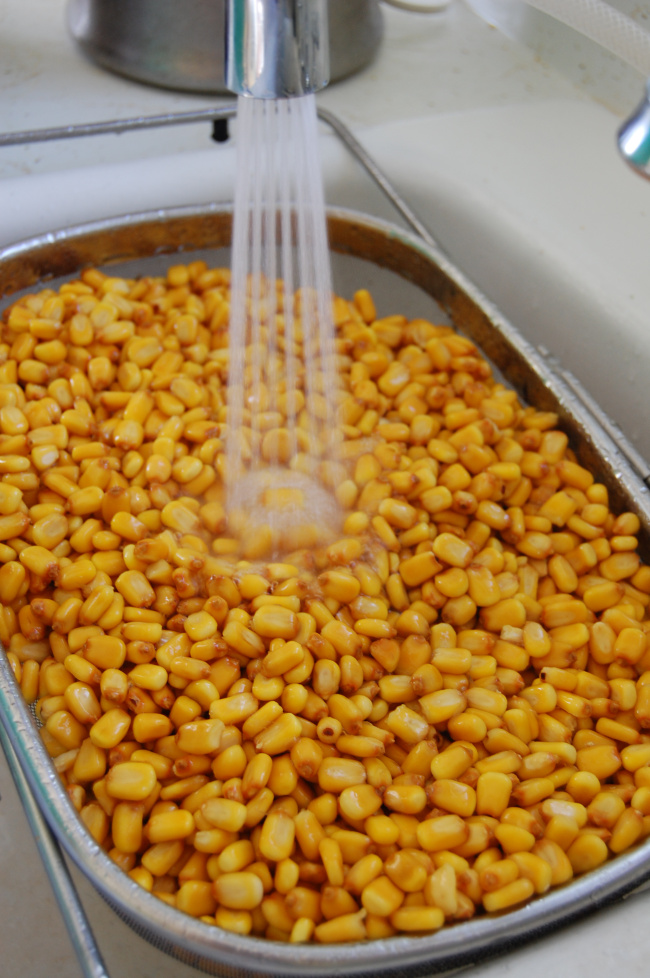 Cheeseslave’s next instructions were simple: Just blend some of the corn in a food processor and add water until you reach the desired consistency. I added some sea salt to the mixture. 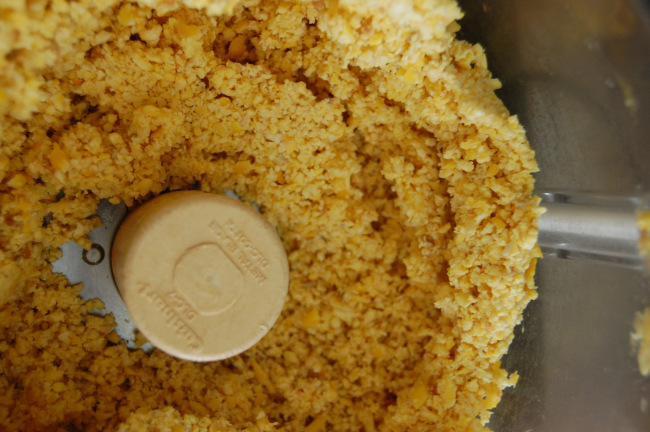 Here it is with some added water and blended some more: 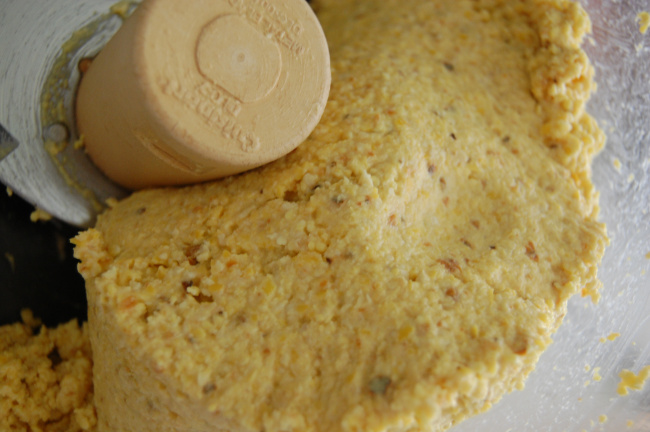 It forms a lovely dough – and ends up quite smooth. You don’t want it too wet: 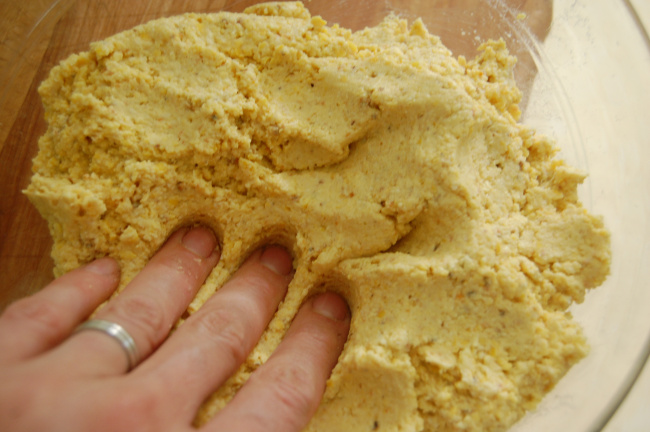 This dough definitely had more character than the Bob’s Red Mill brand had. Here are the two doughs side by side (home ground corn on the left): 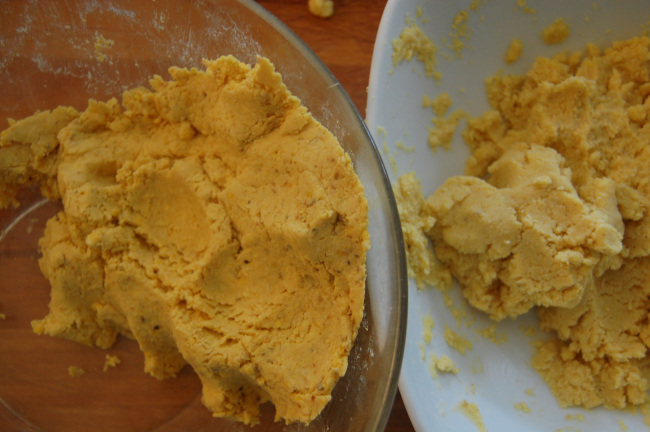 Next, form into balls, press into rounds, and cook in the pan like my previous post explains. Again, I find it’s most successful to hold tortillas in a towel inside of a covered pot to allow them to steam and soften before serving. 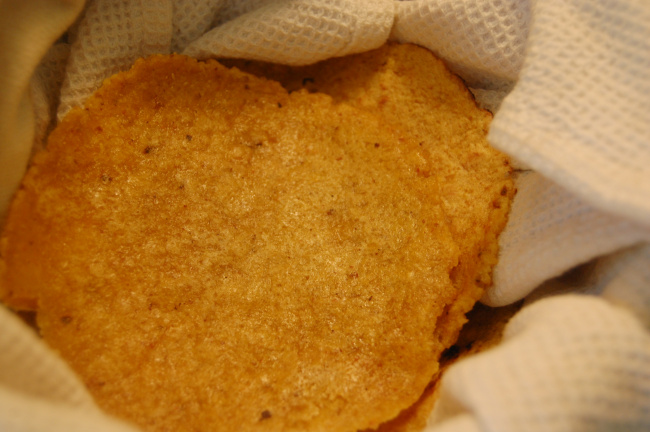 I thought the result was great, not quite as soft and flexible as the Bob’s Red Mill flour recipe, though. A friend tasted them and said how much she loved the texture of them – “You can really taste the corn!”. I agree – a rustic texture with tiny flecks from the corn’s germ really added interest.

Conclusion: I would recommend the Bob’s Red Mill flour if you don’t have the use for a large bag of corn, but I will do the soak again since I have a lot to use up – and I liked the flavor and texture.

(* As I’ve experimented with this recipe, I found that adding 1 tbs. arrowroot powder as a binder/thickener gives these tortillas an even softer, more flexible texture)

Because the whole reason I wanted to try making corn tortillas from whole corn was because of my grain mill… I still had ONE other option to try.  It’s quite ridiculously tedious – but I had to try.  I saved some of the soaked corn kernels, put them in my food dehydrator overnight (until totally dried) and then ground them in my grain mill. I’ll spare you the process… it wasn’t much different/better than any of the other results – and the corn kernels are a bit large for my grain mill, which made me nervous that it took the mill so long to grind them. I won’t do it again.

I’m also interested in making hominy from my dried corn (it uses the same soaking process) – I think it will be a fun addition to soups this fall.  Perhaps I’ll make hominy and tortillas at the same time.  Quite simple, and that $5 bag of pickling lime will go a long way! Welcome to 2021! The New Year is an exciting time as we all focus on goals and resolutions. At Plan to Eat, we’re focused on